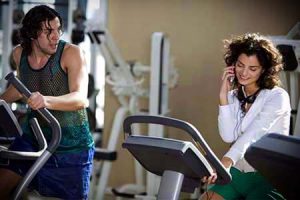 For those that find it tough to make it to the gym three times a week, the question whether you can workout too much might seem ridiculous. It’s not. There are people that do tough workouts every day for long hours, hoping to achieve their goals more quickly. The problem is, they often find they’re not only, not achieving their goals, they’re losing ground. Yes, you can definitely workout too much and there are signs that let you know this is occurring.

Your body works hard during exercise.

When you’re working out, you’re creating stress on your body. While exercise reduces stress by burning off stress hormones, it creates stress in another way. It causes a suppression of the immune system that impairs the immunity for up to 72-hours. It also takes time for muscle tissue repair. When you’re working out, small micro tears occur. When they repair, they repair stronger than before, but if you’re over-exercising, that can’t happen.

There are signs to look for when you suspect you’re putting in way too much time working out.

The first most important sign is that your performance will suffer. Instead of improving, you’ll go backward and be unable to accomplish as much as you did before you hit the wall. Some people try to push past this by making their workout tougher or longer, which only makes it worse. On top of that, most people who over-exercise find they simply don’t enjoy it as much as they did. For those pressing weights, it often shows up this way.

Signs outside the gym you’re overdoing it.

Check your mood to see if you’re overdoing it. If you’ve ever been around someone that’s really sick, with their body fighting hard to get back to normal, you’ll often notice they’re depressed, confused, angry, anxious or irritable. That’s not too different from people who are ove-rexercising. It comes from over stressing the body. Delayed recovery time is another sign, just like a weakened immune system is. People often experience increasing fatigue. It’s chronic and not the good kind that says you’ve worked out hard. Most people feel tired when they first start working out, but this occurs after working out for a while.