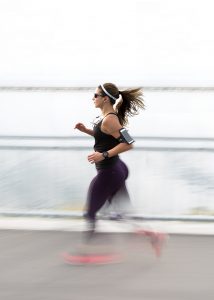 There’s a lot of ways to relieve stress, running is one of those ways. Here in the gym in Chino Hills, CA, we use kickboxing and other types of workouts to do it. That doesn’t mean either way is right or wrong, they just both approach the fight or flight response differently. The fight or flight response is what your body experiences when you’re under stress. As you can tell, kickboxing is the perfect fight option and running is a great flight option.

The body responds to stress with a primitive mechanism.

When a cave person first encountered situations where he or she was threatened, either by members of a hostile tribe or a wild animal, the body went into a mode that prepared it to run or fight. Blood flowed into extremities, the heart beat faster, blood pressure and breathing rate elevated. This was all caused by the triggering of the sympathetic nervous system to release hormones to prepare the body for the activity.

What do wild animals and hostile caveman tribes have to do with you?

Some things don’t change. People still get stressed. What does change is the cause of the stress. Today, it’s not wild animals that trigger it, but often a wild crowd at the store trying to get the same bargain on Black Friday. It’s not hostile combative tribes, but a hostile boss or an angry customer. You might want to fight them or simply run away, but you can’t. It’s not socially acceptable or even appropriate. Instead, the stress builds up inside you and you carry it with you until you burn off the hormones by running or doing other physical activity that mimics fighting.

Add one more response to the category.

If you’ve ever experienced something so scary that you couldn’t move, you’re not alone. One added response often not mentioned is the “freeze” response. You literally freeze in your place. It’s probably because early man was safer by remaining quiet and still when a wild animal approached, rather than running and causing the animal to notice them. It’s also similar to the feeling you get when you’re not taking action on the fight or flight. Your muscles tense and you’re ready for action, but none take place so you’re left with that sickening feeling. You need to burn off the hormones with an activity that gets your heart pumping and makes you sweat.