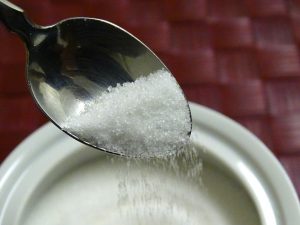 Which is better for you in the contest of sugar VS sweeteners. While artificial sweeteners have no or lower caloric value, they were voted the worse sweetener by Cleveland Clinic dietitians. That’s because they don’t satisfy the hunger for sugar, plus several other factors. Artificial sweeteners are better for you than sugar if you’re diabetic or prediabetic, since they don’t cause a spike in your blood sugar. However, consumed too frequently, they also are associated with insulin resistance, changes in gut bacteria and increased fat storage. Some, namely aspartame, has been shown to increase the risk of cancer in three separate animal studies, according to the dietitians.

So sugar wins the contest? Not quite!

Table sugar produces inflammation in the body. While it has substantial calories, it has no benefits nutritionally. You can get addicted to sugar and before you know it, you’re consuming more and more to get the sugar high. Sugar is in hundreds of foods, from ketchup to “healthy” granola bars. One can of soda contains as much sugar as the average man should have in a day and more than the average woman should have to remain healthy.

At one time fat was blamed for coronary problems, but that was because of a study funded by the sugar industry. Since then, much has been learned and it seems that sugar is the real culprit. One 15-year study showed that people whose diet was 25% or more were twice as likely to die from heart problems than people whose diet was 10% or less. That’s just added sugar, not sugar found in food.

Stevia is a sweetener that’s natural.

Stevia is a natural sweetener that’s between 200 and 300 times sweeter than ordinary sugar. The negative word on stevia is that it dulls your taste buds, so you tend to look for the same sweetness in other foods. That means you’ll eat food that’s sweeter and sweeter—contains more sugar. Stevia is a plant and the sweetener is made from the leaves, so it’s natural. It contains no calories.